The City of La Verne is launching its first City Council districting process, with the first of four public hearings scheduled to take place virtually on Monday, August 30, 2021 at 6:30 p.m. During this virtual hearing, residents can learn more about the districting process and purpose from the City’s independent demographer. Residents can access the meeting by registering in advance via Zoom. Once registered, residents will receive a confirmation email containing information on how to join the webinar.
In July, the La Verne City Council unanimously approved a resolution to initiate the process to switch from at-large elections to by-district voting in order to avoid potential costly litigation and allow for more equitable elections and accountability among representatives. This new voting system would create five districts, each having one representative on the City Council which would then have a rotating mayor.
Local governments use data from the Census to draw and redraw their voting district lines to reflect how local populations have changed. The City’s final maps, informed by resident-drawn maps, resident feedback on communities of interest and demographer expertise, must follow strict legal requirements including those that prohibit the consideration of current Council Members or political candidate residences and forbid racial gerrymandering. Members of the La Verne community are encouraged to participate in the districting process to ensure district lines respect neighborhoods, history and geographical elements.
To help share information about districting, collect public feedback and eventually gather draft maps, a dedicated districting webpage has been launched: MapLaVerne.com. The webpage includes background information on the districting process, a tentative schedule of participation opportunities, frequently asked questions, and eventually resources for drafting maps and sharing feedback on previously drawn maps. The City’s demographer is currently awaiting finalized Census data from the State of California, which is projected to be available in September 2021. Mapping tools are anticipated to be available in the coming weeks, and the City will update the webpage and notify residents via social media accordingly.
The second La Verne districting public hearing will take place on Monday, September 27, 2021 at 6:30 p.m. during an adjourned special meeting of the City Council, which can be streamed on the City’s website, attended via Zoom or in-person. The City will hold the last two hearings after Monday, October 18, 2021, the deadline for residents to submit their own district maps for consideration. The La Verne City Council will adopt a final map before the State’s deadline of Wednesday, December 15, 2021.
As the districting process moves forward, the City will continue to update the webpage to include additional details on future public hearings, mapping opportunities, new FAQs, and more. Questions, comments and map suggestions can also be submitted on MapLaVerne.com through the website’s Contact page. 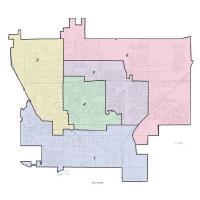