NOTE: While Vermont Ave. will reopen soon to northbound/southbound traffic, West Ada Ave. north of the crossing (at Vermont Ave.) will remain closed for three more weeks to allow crews to complete utility and street work. Click here for the construction notice. As a reminder, West Ada Avenue south of the crossing is permanently closed. When Vermont Avenue reopens, it will mark 12 of the 21 at-grade crossings that have undergone reconstruction and reopened to the public. More than half of the grade crossing work is now complete.

With Vermont Avenue 's reopening today, there are now three grade crossings underway with reconstruction: Pasadena Ave. in Glendora; Walnut Avenue in San Dimas; and D Street in La Verne.
At all of these crossings, crews continue to make progress relocating and protecting underground water, sewer, gas, communications and power lines; and will then move on to installing new tracks and safety equipment, and rebuilding the roadway, curbs, gutters, sidewalks and medians.

On Sept. 27, crews will return to the Elwood Avenue. crossing in Glendora for a three-week closure to complete underground utility and street work. For more information on this second closure, click here.
Throughout the next year, crews will also revisit several other grade crossings that have already undergone major reconstruction and reopened, but still have remaining activities that require a second short street closure. Of the 21 at-grade crossings on the project, only the following five will require short second closures: At all of these grade crossings (except for Elwood Avenue), second closures are necessary to finish the freight track relocation. A temporary freight track was installed during the initial work at these locations to allow freight service to be maintained without interruption as crews completed other activities. When ready, crews will return to each crossing to remove the temporary freight track, realign the freight onto the new relocated track, install the second light rail track and complete the remaining safety improvements. Notices will be distributed ahead of each of these future closures.

Crews closed the intersection of Bonita Avenue /Cataract Avenue in San Dimas for five days to complete underground utility work and relocate the freight track to make room for the light rail bridge work to begin in earnest. Following the one-week closure, crews were able to move into Phase 3 of the four-phased plan to reconfigure the intersection and keep Bonita Avenue open to traffic for as much time as possible (a two-month closure of Bonita Ave. is needed and is expected to take place next summer).

Phase 3, which started this week, requires a nine-month closure of Cataract Avenue. north and south of Bonita Avenue to allow crews to continue work on the light rail bridge foundations and start work on other aspects of the structure. Access from eastbound Bonita Ave. to southbound Cataract Avenue will remain open and available. For more information on this long-term closure, click here.

In Glendora, crews have been underway with bridge work at San Dimas Wash, Route 66 and Foothill Boulevard/Grand Avenue intersection. At the San Dimas Wash, crews recently installed four concrete girders for the new light rail bridge. This new bridge will carry eastbound and westbound trains over the channel in the future. The adjacent relocated freight bridge was already completed and is ready for use by freight trains.

Alongside the existing freight bridge over Route 66 in Glendora (which will remain intact), crews have begun building the foundations for the new light rail bridge. In late November, a 10-day full closure of Route 66 at the bridge will take place to allow crews to complete work on the bridge foundations. More information will be available for that closure soon.

For more information on the future light rail bridge over Route 66, click here.
At the intersection of Foothill Boulevard/Grand Avenue in Glendora, crews continue to make progress building the retaining walls of the western approach for the future light rail bridge. As seen in the photo above, the walls for the approach will consist of custom form panels that feature the project's citrus design. The walls will measure nearly 1,250 feet in length. To understand what the future light rail bridge over Foothill Blvd./Grand Ave. will look like, click here to see 3D simulations.
On the southeast corner of the Foothill Boulevard/Grand Avenue intersection, crews continue to make progress constructing the foundation for a freight-only bridge over the Little Dalton Wash, as seen in the photo above. This will exist alongside the Foothill Boulevard/Grand Avenue light rail bridge.
Finally, in Pomona, crews have made significant progress on the new light rail bridge that will carry eastbound trains over the Thompson Creek channel. As seen in the photo above, crews are constructing the foundations and bridge deck.

In late August, a 2,000-foot-long rail delivery train, carrying 50 rail sticks, made its way through Glendora, San Dimas and La Verne to offload rail at various locations. The rail sticks, each measuring 1,600 feet long and weighing over 61,000 pounds, will be used to build out the light rail tracks and complete the relocated freight track. Project-wide, nearly 266,000 feet of rail will be installed. This was the second of three rail deliveries for the project. A third and final rail delivery is anticipated by the end of this year.

Tree Removal and Replacement Along the Foothill Gold Line
Foothill Gold Line Construction Authority recently was contacted by a community stakeholder to say that it would be helpful for the community to understand the Construction Authority’s plan for tree replacement, following the clearing of the corridor by KPJV crews that removed all trees that were deemed to be a hazard to the future rail operations. Below is an overview of the agency’s policy and program. We welcome other suggestions.
As part of the Construction Authority’s commitment to environmental sustainability, the agency has an adopted Tree Replacement Policy. The goal of the policy is to save as many trees as possible, but where that is not possible: for every tree that is required to be removed as part of the project’s construction, a minimum of two trees will replace it. And for California Live Oaks, which are protected species, each will be replaced with a replacement ratio equal to or greater than local city ordinances.
It all starts with a survey of the corridor:

Surveying Trees for Removal and Replacement
As part of their initial work tasks, KPJV was required to take a survey of all trees along the 9.1-mile project corridor from Glendora to Pomona and identify any trees that would likely need to be removed (and those at risk of potentially needing removal), because they would be hazardous to the future rail operations by meeting one of the following criteria: The survey included the tree’s location, caliper (diameter of the tree trunk, measured 6” above the ground line) and type. Once the survey was completed, the team looked to save as many of the trees as possible. For those that needed to be removed, a replacement plan will be developed later in the project based on the Construction Authority’s Tree Replacement Policy, as follows:
Canopy Trees Trees/Shrubs That Provided Visual Screen The replacement trees will be planted at various sites still to be determined throughout the project corridor, and may include station areas, station parking facilities, perimeter of traction power substations and city streetscapes within project area limits. The Construction Authority will also provide trees (per the replacement criteria above) or financial assistance to each city to replace trees that were removed from the corridor within city limits

Along Arrow Highway, the need to remove the deodar cedars was identified as part of the 2013 Final Environmental Impact Report. Each was surveyed and will be part of the replacement program. In addition, the Construction Authority has identified a portion of the corridor through La Verne that can be used for revegetation once the mainline construction is complete and will be working with the city of La Verne on the revegetation plan for Arrow Highway in the future. 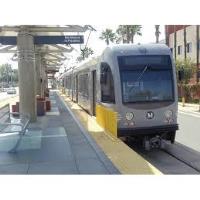